Tag-line: “In 1979 four documentary filmmakers disappeared in the jungles of South America while shooting a film about cannibalism… Six months later, their footage was found.”

It takes a certain kind of film to divide opinion so sharply. Savage, uncompromising and reprehensible, Ruggero Deodato’s Cannibal Holocaust is easily the most controversial film ever made – a brutal slice of exploitation gleefully unaware of its own notoriety. In fact, when the film was re-released in America a few years ago, the advertising proudly stated that it was “the film they did not want you to see.” Few pictures can match Holocaust’s raw, undeniable power, which has been imitated but never quite equalled. 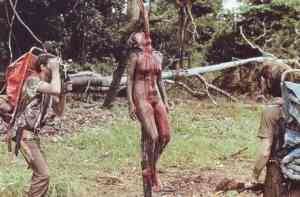 The uncut print has been banned across the world, giving the film a mythic status among horror collectors, who have relied on grainy, washed-out bootlegs for far too long. If you believe the mainstream press, and many people do, you’ll remember Cannibal Holocaust as a sick and depraved waste of celluloid with no redeeming qualities. While “sick” and “depraved” would be apt descriptors for Deodato’s film, it’s not entirely without merit, and debasing a horror film for being horrific is ridiculous. It’s a tough film, with some truly disturbing imagery, presenting a bleak world view that is hard to stomach. It has lost none of its potency.

These days, Cannibal Holocaust is mostly revered for its clever plot device, focusing on the footage detailing a film crew’s demise. Unlike later films which would utilise this “found footage” dynamic, Holocaust leaves the evidence until the last act; incorporating a grisly adventure story that sets the uncomfortable tone. 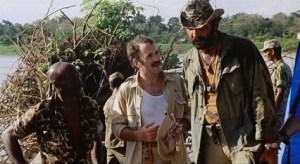 Professor Harold Monroe (Robert Kerman) is an anthropologist sent into the Amazonian jungle to locate a missing documentary filmmaker, Alan Yates (Gabriel Yorke), and his crew. With the aid of local trackers, Monroe delves deep into the Green Inferno, discovering the bloody remains of Yates and his colleagues – devoured by the seemingly peaceful “Tree People.” After offering them a trade, Monroe manages to acquire the cans of 16mm film shot by the crew. Heading back to New York, he offers the footage to the studio executives, who hope to salvage some material from Yates’ legacy. What they are confronted with is shocking: the filmmakers are revealed to be evil sadists, who exploited the natives for their own aims and suffered the consequences. 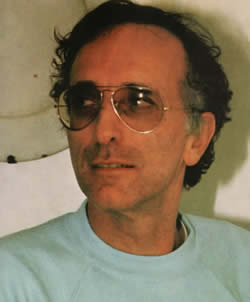 Deodato in the 80s

Highly praised in certain circles, Deodato is a filmmaker who seems to relish the controversy his films attract. One of several Italian directors who became known throughout the world, Deodato never quite escaped the stigma of exploitation fare. In fact none of his work matches Dario Argento’s finest artistic achievements, and Holocaust aside his work even pales in comparison to that of Lucio Fulci, who trod the depths of bad taste all too often. During the late 70s, Italy’s film industry was mostly concerned with cashing-in on the latest trend from America. This resulted in a barrage of zombie films, which were always cheap and often nasty; pillaging the George Romero movies for inspiration. Eventually this fad fizzled out and the cannibal sub-genre sprung to prominence. Deodato tested the waters with 1977’s Ultimo mondo cannibale (Jungle Holocaust), which was a rather bland gore-fest with little to recommend it. This led to a raft of imitations, most notably Umberto Lenzi’s atrocious Eaten Alive! (1980) and Cannibal Ferox (1981). But Deodato is a greater filmmaker than Lenzi, and proceeded to make the sub-genres ultimate entry. 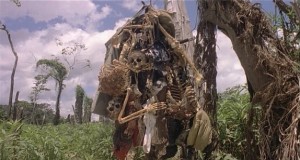 Rather than repeat the techniques of Jungle Holocaust, Deodato took his inspiration from the deeply upsetting Mondo Cane films. They were supposedly “documentaries” – unflinching accounts of real-life violence and atrocities caught on camera. Directors Franco Prosperi and Gualtiero Jacopetti became infamous for their work, coming under fire from Italian authorities for the macabre images they provided. All of it was shot in an authentic manner, although a good deal of the footage was staged. Deodato simply took this aesthetic for Cannibal Holocaust, and the story plays like a fictionalised account of Prosperi and Jacopetti’s exploits.

The result was a double-edge sword – not only does the cinema verité style give Holocaust much of its power, the violence also seems real, which gave Deodato a headache following the films release. After the picture was withdrawn from Italian cinemas, Deodato was sent to court on obscenity charges and had to prove that the murders on film were faked. That’s how convincing the gore in Cannibal Holocaust is. The director lost the first bout of legal battles, and all prints were to be destroyed, but he managed to get the verdict overruled, and the film was eventually released uncut in Deodato’s homeland.

Holocaust tries hard to rise above its unpleasant attributes by taking a moral stance, yet the attempts to give the bloodshed meaning often fall flat. Deodato’s grasp of social commentary is hardly subtle, and the films message is made abundantly clear – the director is stating that civilised man is worse than the so-called “savages”; the filmmakers who meet their demise in the movie go about the jungle raping the natives, burning down their homes and mindlessly slaughtering their livestock. The viewer doesn’t feel any sympathy for Yates and his crew when they eventually meet their maker. The “cannibals” only resort to violence when pushed too far. The message is brought home in the final scene, when Kerman’s professor casually questions: “I wonder who the real cannibals are?” It’s laughably overstated, but nothing in Cannibal Holocaust is geared toward subtlety. Yet, by taking this route, Deodato puts himself in the hypocritical position of decrying the very sensationalism that the picture trades on. If he’s against violence, then why assault the audience with hardcore gore? 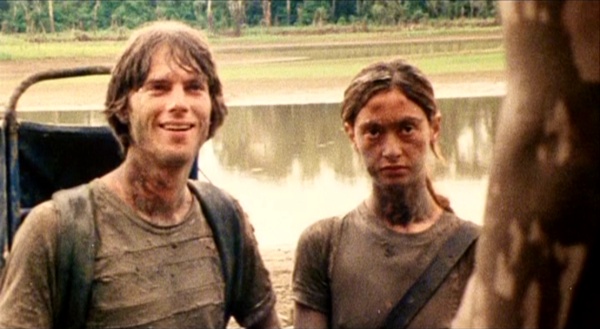 Of course, Holocaust obliterates any chance of becoming a credible social commentary for one unfortunate element: the real-life animal cruelty. What you’ve heard is true. Deodato agreed to the killing of animals, all for the cameras edification. In no way, shape or form, is murdering helpless creatures suitable for entertainment purposes, and it makes the film impossible to defend. What’s most sickening about these scenes is the way the actors behave, appearing to enjoy these barbaric acts. It makes the whole affair much more unsettling. The fact that much of it occurs during the “found footage” portion of the film, only helps to heighten one’s discomfort. A muskrat is gutted, a bound pig is shot at point-blank range, a monkey faces a horrid end, and in the most gut-churning segment, Yates and his colleagues capture a turtle, chop off its head, and proceed to tear-out its innards. There’s no clear reason for why Deodato felt these scenes were necessary, although he’s not the only Italian director to employ such methods (Cannibal Ferox and Eaten Alive! also committed these crimes). While some won’t be able to look past this difficult topic – and who could blame them? – film historians have been able to appreciate Holocaust’s technical bravado.

One of the films more memorable ingredients, is the soundtrack by renowned composer Riz Ortolani (who would go on to score Deodato’s trashy House on the Edge of the Park). I’ve always considered his electronic music to be hugely overrated, but there’s no denying the poetic elegance he brings to some of the scenes here. The opening aerial shot of the Amazon jungle manages to lull you into a false sense of security, and the score undergoes a radical change in tone when the horror begins to unfold. It’s a haunting, beautiful score, that opposes the brutality of the films events. Deodato uses the music to full effect, particularly the main theme, which sticks in the mind. His direction is routine – point-and-shoot like Prosperi and Jacopetti – but it works for the material. It’s just a shame that the director felt the need to line the film with nothing but shock value. 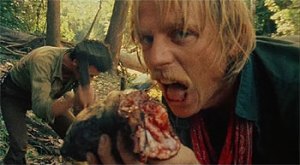 For gorehounds, Deodato’s movie is probably the Holy Grail. The violent, make-believe acts committed on people in the film are no less shocking. Aldo Gasparri’s make-up effects are incredibly realistic, matching his influential work on White Slave and Django 2 for overall impact. Just about every form of mutilation occurs in Holocaust. People are dismembered, castrated, raped, sliced-up and, err, eaten. Deodato crosses the line often, and only people with cast-iron stomachs need apply. Seeing a woman’s foetus forcibly aborted wasn’t on my list of things to see, and sitting through Holocaust is an endurance test. Watching it makes you feel guilty.

After three decades, Cannibal Holocuast is still a deeply polarising experience – impossible to defend and shocking in its extremism, its nevertheless anchored by powerful filmmaking and themes that strike a universal chord. It’s not “entertainment.” The film is too hard-hitting to ever provide a good time, and the animal violence will forever mark it as taboo viewing. A film that lives up to its monstrous reputation, Cannibal Holocaust is only worth enduring for horror completists and purveyors of cult cinema. Approach with caution.

It isn’t unreasonable to say that Cannibal Holocaust ruined the lives of everyone involved. Deodato got rich but the film left a stain on his character. He even regretted making it later in life (despite an estimated worldwide gross of $200 million). It was also one of the many films on the UK’s infamous “Video Nasties” list, along with other notables like The Last House on the Left (1972) and The Texas Chainsaw Massacre (1974). This was before the Video Recordings Act of 1984, when films could be released on home video without a BBFC classification. The circulation of these gore fests caused a moral panic and the press had a field day. The hysteria led to the outright banning of countless films. 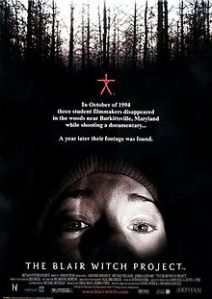 Perhaps the films real legacy is the sub-genre of “found footage” movies that are still being made today (and were popularised by the endless Faces of Death series). The Last Broadcast (1998) and The Blair Witch Project (1999) famously ripped off Holocaust, and it’s hard not to see the genesis of the idea in more commercial fare like Paranormal Activity (2007). Yet none of these films have had quite the same impact.

After 31 years, the uncut print of Cannibal Holocaust is still banned in the UK, although the 2011 edition is the most complete to date with only 15 seconds of cuts. For those willing to spend a bit of money, the Region 1 25th Anniversary Edition by Grindhouse is the one to seek out. It even has an option to remove the animal killings. Would make a nice Christmas stocking filler.